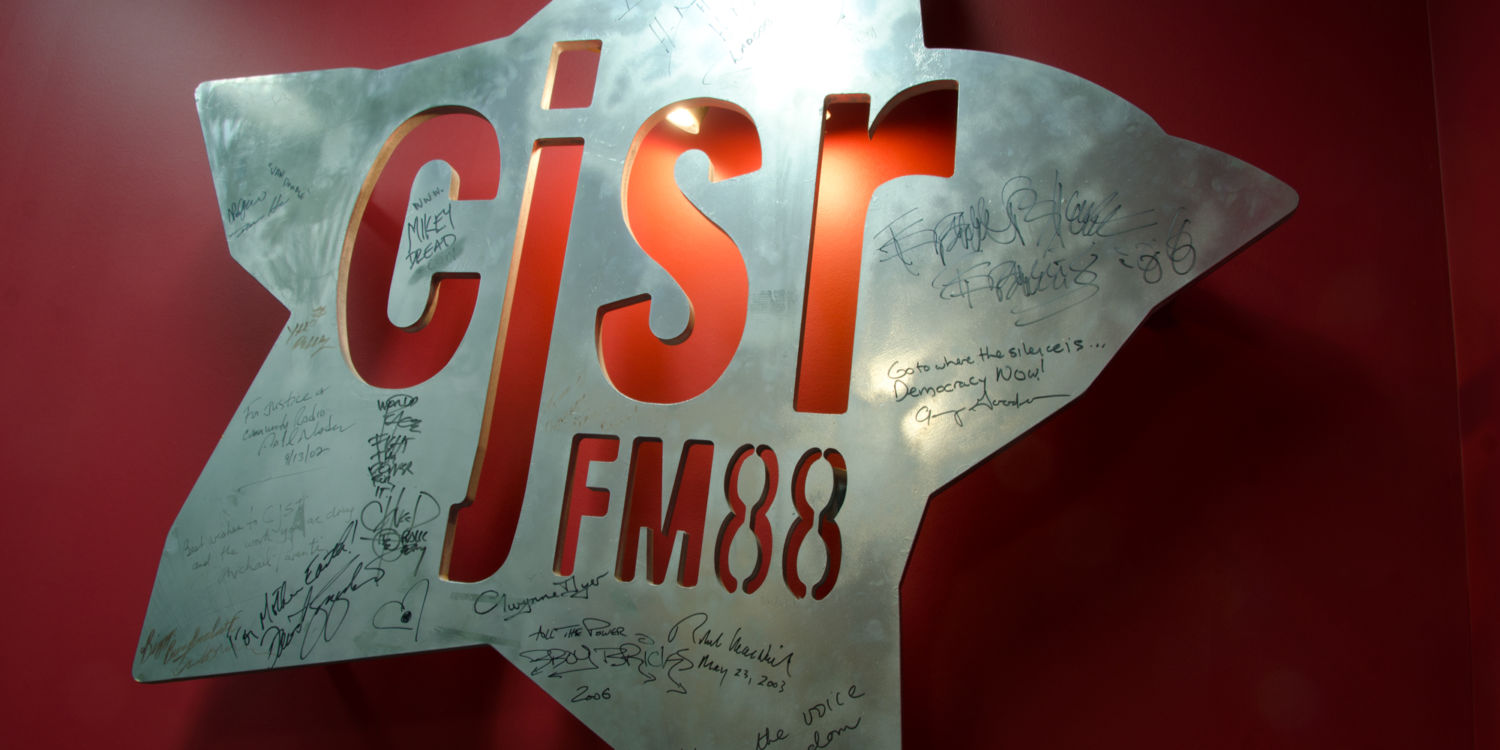 We are Edmonton’s only independent, volunteer-powered, campus and community radio station, broadcasting from an old bank vault!

Located in the basement of the University of Alberta’s Students’ Union Building on Treaty 6 territory, CJSR operates as a non-profit arts & media organization. We amplify voices and issues that are often underrepresented in mainstream media, with a specific focus on local and Canadian content. We also provide students and community members training in radio production, podcasting, and journalism.

CJSR’s mandate is “to enlighten and entertain our audience through high quality and diverse programming that constantly challenges the status quo”. We do this by the creation and presentation of eclectic audio programming that enriches the lives of U of A students and the broader Edmonton community. Broadcasting in a handful of languages, we seek to reflect and meet the needs of our diverse community of listeners in and around the Edmonton area.

We take pride in our wide selection of music and spoken word programming! Listen 24/7 over the airwaves at 88.5FM and online at cjsr.com, or on-demand with our podcasts.

CJSR has a volunteer base of approximately 200 volunteers, with a small staff to manage and support them all. Volunteers are the life-force of CJSR, doing anything from making buttons to DJing live on air. Every person you hear from on station is a volunteer sharing what they love with the world! We’re always looking for new volunteers for on-air and behind the scenes work. Want to get involved? Click here.

We are student and listener-supported radio. Thanks to the generous help and financial support of listeners and students from the University of Alberta (undergraduate and graduate), CJSR continues to provide a wide range of educational, technical, and artistic opportunities to our community.

CJSR is nationally recognized for it’s programming! Our shows and producers routinely win awards for excellence in programming, national initiatives, and community involvement.

For a full list of honourable mentions and awards, look through our saved blog posts (we are really proud that CJSR volunteers won Best in Student programming in 2017 and 2018!).

CJSR is a member-driven organization governed by an elected Board of Directors, representing our members/volunteers.

First Alberta Campus Radio Association (FACRA) is the not-for-profit organization and registered charity that holds the broadcast license for CJSR-FM 88.5. The FACRA Board consists of up to 12 elected and appointed members, including the requisite 2 SU and 1 GSA representatives from the University of Alberta.

CJSR made its first FM broadcast on January 7, 1984—the first song was “You Turn Me On, I’m a Radio” by Joni Mitchell—but its roots stretch to the founding of CKUA in 1927.

That station, which was owned by the university until 1944 and whose studios were located at the Power Plant, provided the foundation and infrastructure for the creation of the University of Alberta Student Radio Directorate, the direct progenitor of CJSR.

The Radio Directorate, which changed its name to the Radio Society in 1948, broadcast over a closed PA system all over campus, and weathered funding cuts, format changes and a temporary shutdown due to lack of funds. By the ‘70s it had built an AM antenna—that could only broadcast as far as Lister Hall—and gained the call letters CKSR. In 1978 the station was renamed CJSR when a television station in Chilliwack wanted the call sign and the CRTC granted the request.

In 1983, after more than a decade of work, CJSR was granted an FM license at 88.5 FM, the furthest left the dial could go, and focused its attention beyond the university campus from where it still broadcasts. For the past 30 years, CJSR has been a voice for diverse communities not represented on radio anywhere else in the city: it broadcasts alternative news, cultural programming and underground music that cannot be heard anywhere else, with a strong focus on local culture.

CJSR has also long been a place of inclusion, where people of any age and background can learn the various aspects of broadcasting. From board members, to music librarians, technicians, organizers and on-air hosts, CJSR is proud to be volunteer-run radio dedicated to pushing the status quo.

Want to get involved with CJSR? Volunteer or donate to help keep the station on the air!